Veera is a CIRCUS & VARIETY ARTIST &

Sirkustaiteilija in her native language finnish.

She is specialized in tight wire and hula hoops with 10+ years of international experience.

Veera is available worldwide for corporate- and private events and at variety, dinner- and circus shows.

She can also work as a model for photo-and video shoots, advertising campaigns and product launching.

Her work fits also well together with other artists on stage, like mucicians, singers and artists from other art forms.

Besides liveshows, she is available for virtual- and hybridevents.

Veera works also as a master level coach and a consultant for young artists.

She is multitalented in office and an excellent choice as a production assistant.

for professional- and amateur use. 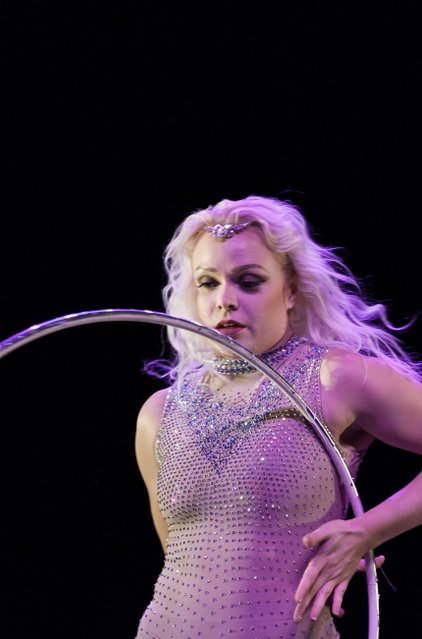 The first photos of her with a hula hoop are from her being only 4 years old. A couple years later during a class in her first years at school, Veera heard about a local youth circus called Linnanmäki Circusschool. It sounded fun and exciting hobby and she asked her parents, if she could go and give it a try.

They found out, that it was a perfect match and only a year after, at age of 7, she performed her first show with hula hoops act.

Years passed by training and she wished to become better and stronger performer, a professional to be able to make her living.

She graduated in 2011 and has been touring non-stop ever since.

Her first contract was a the tight wire act in 'Amaluna' by Cirque du Soleil premiered 2012.

After a full North American tour with Cirque du Soleil, Veera arrived back in Europe in 2015 and keeps on working as a freelancer with both of her acts enchanting the audience year after another.

She is based in EU-area always looking interesting shows and projects to work.